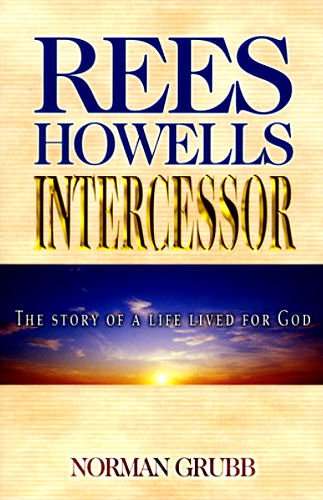 Rees Howells was born in Wales in 1879. His father was a miner. Rees was child number six in a family of eleven children!

This biography of him takes us from these beginnings and then through each milestone of his life. From the time of his conversion as a young man (while working in America) his life was one lived in close communion with God. God took him through many progressive lessons teaching him about the life of faith, which God wants all of His children to enjoy. However, in one area particularly Rees Howells was taken into realms of what may be considered by some to be a more ‘special’ ministry – intercession. I wish I could remember where to go back to in the book to find Rees Howells’ definition of ‘intercession’ but I’m sorry I can’t recall. The general inference of the book is that ‘intercession’ is dedicated, fervent prayer accompanied with ‘identification’ with the person/situation being prayed for.

This principle of ‘identification’ and many of his lessons in God’s school of intercession are noteworthy and inspiring but I would have to say that there were some situations and methods that gave me cause to wonder whether some things were really done God’s way (?). I am not going to cite an example, as that would take too long to explain and I really couldn’t decide in the few instances where I did have cause to wonder.

However, to bring things back again to the positive I must say that I could very much identified with many of the things that God taught him. I long ago took note of some of the principles he employed. For example, Rees Howells had a principle for a particular situation concerning money matters. When he knew that certain expenses were coming up but he only had limited resources at that moment in time, he always said, “first need, first claim.” In other words he didn’t hold on to money for one thing when there was a more immediate need at hand. Frequently that meant somebody else’s need and not necessarily his own.

God’s dealings with him in money matters are mentioned a lot. I find it very interesting to note that he was converted at around the time that George Muller was departing this world. There are a few mentions made of Mr Muller in the book, in particular as being an example to Mr Howells in matters of trusting God for finance. Some elements of Rees Howells’ life are reminiscent of George Muller’s but without doubt his own life and experiences were not a mimic of anyone else’s. God led Rees Howells in very specific ways in each phase of his life. In following the direct leading of the Lord this way he accomplished, through prayer and intercession, some remarkable victories.